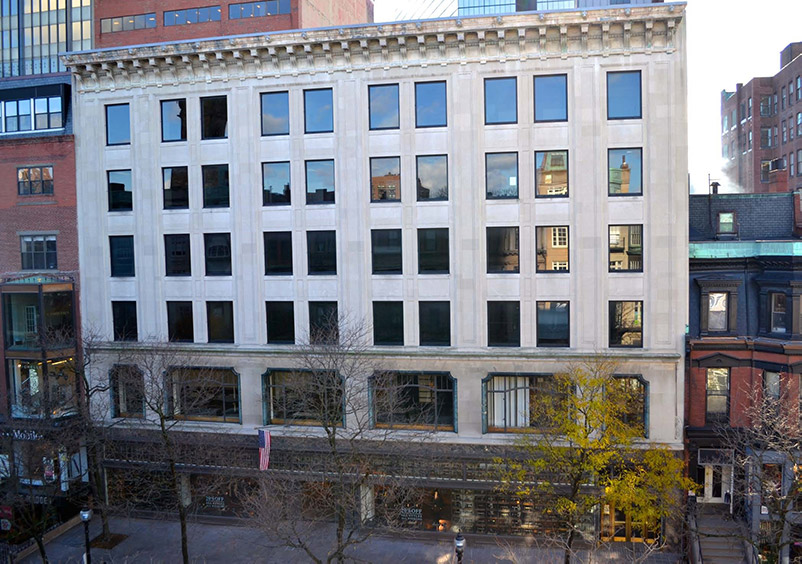 BOSTON — Urban Meritage, Novaya Ventures has begun 2015 much the same way they ended 2014—growing by leaps and bounds, most recently via the $54.2 million purchase of 126 Newbury St., a six-story, 50,000-sf office/retail building on the third block of the globally known shopping thoroughfare. The deal first relayed at therealreporter.com on Thursday is an all-cash purchase that gives the partnership launched in early 2013 a portfolio of 11 buildings in Boston, all but one of them on Newbury Street.

“We are very happy,” UMNV principal Michael Jammen says of the agreement which he concurs is the most substantial of the group’s deals heretofore, and is a property on the radar screen of Urban Meritage for years, with owner Rudin Management unwilling to part ways until an off-market proposal was accepted this time around by the New York-based owner who had paid $9.3 million for 126 Newbury St. in Dec. 1986, as the article at therealreporter.com conveyed. Sean Gildea of Dartmouth Co. brokered the transaction.

UMNV principals at the time were unavailable to comment on the commitment, and Jammen declined later to discuss specific plans for the property beyond confirming the tenant in floors two through six will be departing in February, a departure Jammen indicates is seen as an opportunity to refresh the space and take advantage of a Back Bay district featuring some of the hottest conditions for multifamily, office and retail uses, all linchpins of the eclectic Newbury Street landscape. “We think there are a lot of possibilities, and there is a lot to work with (given the size) of the building,” says Jammen. “It is very flexible in what can be done there . . . We think it is a phenomenal property in an irreplaceable location.”

Dating to 1920, 126 Newbury St. benefits from a wide berth of street frontage rarely seen on the tightly packed district, many of the structures tiny slivers of CRE mere feet in width. The current tenant in the lower floor is All Saints Spitafields. The current office tenant is Sanford Brown College. The initial article raised the idea of possible retail uses on the second floor, such as a restaurant, but Jammen says UMNV principals are not ready to unveil any announcements.

The latest acquisition gives the partnership between Urban Meritage whose principals are Jammen and Vincent G. Norton Jr. plus Novaya Ventures a platform just under $150 million that did expand to Kenmore Square just west of Newbury Street with the $28 million purchase of a 30,000-sf retail condominium in the Hotel Commonwealth at 500 Commonwealth Ave. The upscale hotel that was purchased last year by Sage Hospitality is in one of the city’s busiest business districts and undergoing a major expansion, and observers spoken to claimed when the deal was made that UMNV’s vast experience of leasing, managing and owning Newbury Street retail will serve them well in repositioning the Hotel Commonwealth space.

Between that investment and two more properties acquired in 123 and 166 Newbury St., ($9.0 million and $12.8 million), UMNV spent nearly $50 million in the final month, and now has put an exclamation point on the firm’s ambitions which have brought them almost into the realm of its largest property owner, Jamestown Advisors, which owns 23 buildings acquired in 2012 from Taurus Investment Holdings that traded for $225 million. Novaya Ventures is led by several Taurus alum around at the time, including James M. Alden, Peter Carbone III, Jeffrey Theobald and Scott R. Tully. The fund buying the properties was initially set up as a $300 million vehicle, putting the venture at nearly the halfway point in just 21 months.

While closely knit, the two entities comprising UMNV do have their own separate investments, as the earlier article detailed, with Novaya Ventures holding properties from New Hampshire to Ohio, including industrial buildings and value add product.