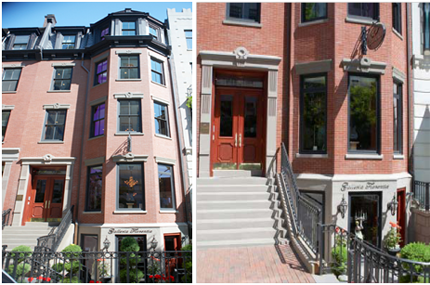 BOSTON—Launching a new $200 million fund focused on a familiar venue—Newbury Street—a partnership between Novaya Real Estate Ventures and UrbanMeritage has scored its first investment after paying $10.0 million for 79 Newbury St., a five-story, 7,225-sf building in the lower tier of the famed shopping boulevard. Joining the two Boston-based firms in the fund is L&B Realty Advisors of Dallas.

“It is something special,” one observer opines of the latest in a slew of properties changing hands on Newbury Street this decade, many of which the managers of UMNV 79 Newbury LLC were key players in transacting. Novaya’s Peter Carbone III worked with UrbanMeritage founders Michael T. Jammen and Vincent G. Norton Jr. in Newbury Street’s most dramatic trade of the new millennium—the $225 million purchase of nearly two dozen properties by Jamestown in 2011, assets divested by the latter duo and partner Taurus Investments Corp., the global real estate powerhouse where Carbone was employed prior to starting Novaya Ventures two years ago.

The seller of 79 Newbury St. is YAS Real Estate LLC, an entity managed by Rouzbeh Yassini-Fard that had held the building since paying $3.02 million in July 2004. The property that dates to 1899 was renovated extensively in 2007. Jammen relays to therealreporter.com that a bifurcated strategy at the outset is being implemented, bringing 2,600 sf of retail space in the basement and first levels to the market along with three floors of luxury office space totaling 4,000 sf. International apparel purveyors and jewelry stores will be among the targets of the retail portion, which boasts such high-end finishes as Brazilian cherry and raised mahogany paneling, plus granite flooring and a private deck. Similar materials adorn the office component, also sporting its own private deck, plus novel smart-building technology and a four-vehicle garage. “The space is perfect for a family foundation, private equity firm or any user that seeks a luxury building with the utmost of privacy,” Jammen indicates  of the office product.

One observer says the three-way partnership is “off to a flying start” in its campaign to grab up available product in and around Newbury Street. The group already has one asset under agreement and has its sights set on 8, 324 and 330 Newbury St. Underscoring its focus, the fund is known as the Back Bay Retail Program. Jammen would not identify the asset it has under contract or say when the closing is anticipated.

Novaya Real Estate Ventures was formed last year by Carbone and other Taurus alum, including James M. Alden, Jeffrey R. Theobald and Scott R. Tully. Novaya has made two substantial suburban acquisitions in Chelmsford and Lowell and last May bought 112 Water St. in Boston’s Financial District, later moving company headquarters into the 15,500-sf mixed-use structure. UrbanMeritage, meanwhile, was tabbed by Jamestown as leasing agents for its Back Bay holdings. Its office at 85 Newbury St. is just a few doors down from 79 Newbury St.