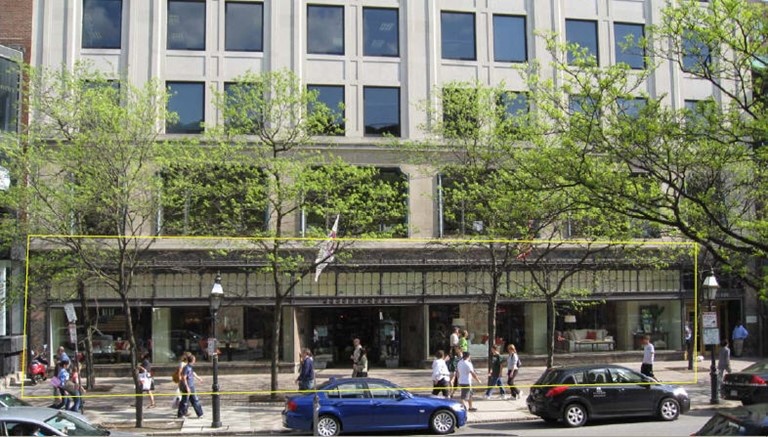 BOSTON—Bringing its CRE holdings secured here to 11 properties in just 21 months, the partnership of Urban Meritage and Novaya Ventures (UMNV) has taken a giant step forth in purchasing the hulking six-story 126 Newbury St. from its longtime New York owner in an eye-popping $54.2 million deal consummated earlier today. Rudin Management’s trade brings UMNV’s portfolio of assets focused along the famed shopping boulevard to nearly $150 million, blowing past the $100 million level in one fell swoop and giving the firm three prime buildings between Berkeley and Exeter Streets, the latest on the third block up from the Boston Public Garden and next to the second block where UMNV began its platform via the $10.0 million purchase of 79 Newbury St. in April 2013, as initially detailed by Real Reporter.

As to the latest conquest, for which principals involved did not respond to therealreporter.com by press deadline, Dartmouth Co. principal Sean Gildea is reportedly the broker on the exchange, an assignment one industry observer terms “an irreplaceable property in a signature location” while acknowledging the agreement that gives UMNV a wide swath of retail frontage for a streetscape along the Newbury Street CRE gauntlet, as well as a scale that towers over its surroundings. Its heft—the address is 120, 122, 124 and 126 Newbury St.—enables a bifurcated income stream from office space on the upper levels and retail at the lowest part.

The asset that Rudin acquired for $9.3 million in Dec. 1986 features All Saints Spitafields in the retail whereas the tenant in the upper levels, Sanford Brown College, is departing in February. That pending vacancy might be fretful in certain climates, but observers maintain the very nature of Newbury Street gives its adroit ownership multiple paths to pursue, among the viable concepts cited including residential on the upper levels and limited retail such as a food concept on the second floor. A large patio area may also be energized as part of the repositioning program UMNV principals are quite experienced at, especially with many of their collective founders not only cobbling together the latest assemblage, but also having transacted the 23-building portfolio Jamestown bought in Nov. 2011 at a record $225 million from Taurus Investment Holdings.

Several Taurus alum formed Novaya Ventures in Dec. 2011 and have pursued deals outside the Hub’s Back Bay and as far a field at Ohio and Virginia, with industrial and suburban value-add projects among their targets. Representing more than 100 years of collective experience, UMNV comprised Novaya leaders James M. Alden, Peter Carbone III, Jeffrey R. Theobald and Scott R. Tully, with Michael T. Jammen and Vincent G. Norton leading the charge from the Urban Meritage team, an operation active in leasing, marketing and owning Newbury Street real estate, even maintaining their headquarters along the globally known shopping boulevard. Now they have secured “an absolute gem” by one account from an admiring investor familiar with 126 Newbury St. and its ilk, although that Back Bay expert says “there is little like it” on Newbury Street, as evidenced in the price tag shelled out.

Prior to 126 Newbury St., UMNV had not strayed beyond their core area to Kenmore Square, but seemingly got a lot in return for their $28 million spent to buy a 30,000-sf retail condominium in the opulent Hotel Commonwealth at 500 Commonwealth Ave. That and the other December Newbury Street acquisitions were outlined in the Dec. 11th Real Reporter that explained UMNV bought the retail in a deal engineered by Eastdil Secured where the hotel’s new owner broke off the retail to UMNV, a deal that not only cut the hotel’s purchase price ($76.5 million in Dec. 2012) by a large margin, UMNV’s retail acumen was deemed a bonus for enlivening the retail in the hotel which is undergoing its own upside via the addition of 100 new hotel rooms.