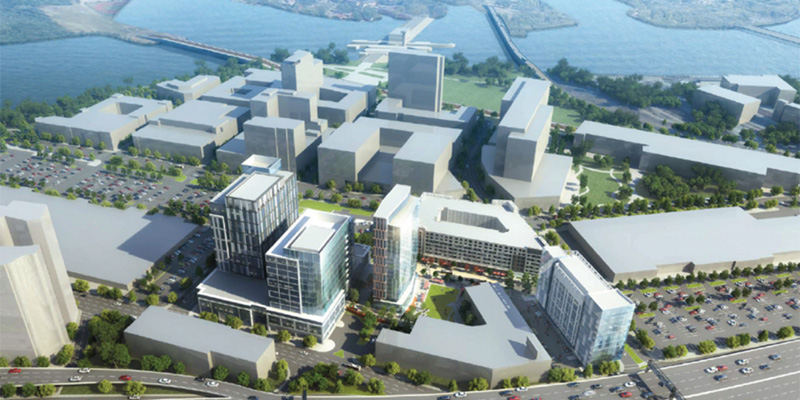 Somerville, MA – May 15, 2018  – A joint venture of Cresset Development and Novaya Real Estate Ventures on Tuesday will pitch its 1.5 million-square-foot mixed-use project in Somerville, dubbed “Xmbly,” to the city’s planning board. Xmbly is planned on a 9.4-acre parcel between Interstate 93 and the Assembly Row and Assembly Square developments owned by Federal Realty Investment Trust (NYSE: FRT). Xmbly’s developers are pitching the property as a gateway to Assembly Row. They see Xmbly as a site that’s appealing to residents and office tenants looking for accessibility via the highway or the MBTA’s Orange line recently built Assembly station. The accessibility to both the highway and MBTA line makes Somerville “in many ways, a Boston neighborhood,” said John H. Baxter, executive vice president and principal of Cresset Development. “It’s got all those boxes checked”

Cresset and Novaya envision five new buildings and the renovation of a sixth, located at 5 Middlesex Ave., all surrounding an acre of public green space. All told, the development would feature 814,000 square feet of office/research and development space in three buildings, 489 housing units in two buildings, renovation of an existing 162,000-square-foot office at 5 Middlesex Ave. and some 21,000 square feet of retail space.

The project could cost between $600 million and $700 million to build out over the next five to six years.

Here’s a breakdown of what Cresset and Novaya are proposing for Xmbly:

CDNV Assembly LLC, the joint venture LLC formed by Cresset Development and Novaya, acquired the existing office at 5 Middlesex Ave. from RD Management LLC of New York in January for $35 million, according to a Middlesex County deed.

The office towers’ visibility from Interstate 93 could also be appealing to potential tenants, Baxter said, pointing as an example to New Balance Athletics’ global headquarters alongside the Massachusetts Turnpike.

Indeed, the Xmbly proposal comes at a time when office space, particularly for technology tenants, is in high demand in Greater Boston. For example, Philips North America in January made the surprise announcement that it would relocate its headquarters to the newly renamed Cambridge Crossing