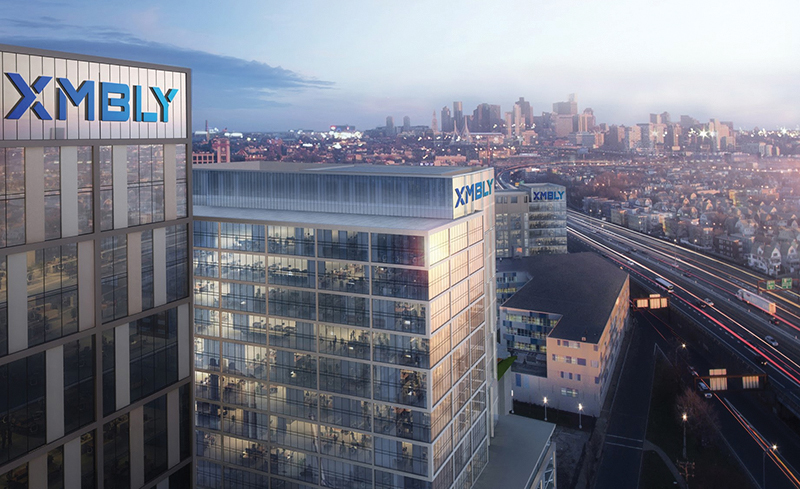 Somerville, MA  The Somerville Planning Board gave unanimous approval to XMBLY, a 1.5 million s/f mixed-use development in the Assembly Sq. neighborhood. XMBLY has been designed to create destination office/lab space in a neighborhood that has become known primarily for retail and residential uses. The mixed-use plan also calls for an additional 489 units of residential, and 20,000 s/f of business-supportive retail.

The approved master plan calls for the following commercial buildings:

• The refurbishment of an existing 162,000 s/f office building

Additionally, the master plan allows for 489 units of residential housing over two parcels. It is expected that these residential buildings will be branded differently, with the “XMBLY” brand extending to the commercial campus. The first phase of site preparation and infrastructure planning is scheduled to begin in early 2019.

“Assembly Sq. is now known for its retail and residential uses, XMBLY will bring a first-class office campus to the neighborhood for the first time. This is an innovative, business campus designed to attract the companies that are leading Boston’s next economy forward,” said John Baxter, executive vice president of Cresset Group.

“This marks a major step forward for the Assembly neighborhood, a development that has been designed specifically for the needs of businesses,” said Peter Carbone of Novaya Real Estate Ventures.

Cresset Group and Novaya Real Estate Ventures are the developers of the project and Spagnolo Gisness & Assoc. is the architect.

“In leasing today, it’s all about attracting talent. Straddling the Orange Line and I-93, XMBLY connects to a larger, more diversified workforce than other Greater Boston neighborhoods,” said Phil Giunta of Newmark Grubb Knight Frank, the property’s exclusive leasing agent.